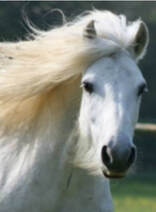 Whitehaugh Hill Teri
​
Twenty two year old Teri is a purebred Scottish Highland Pony. At 15hh, he is above the average size for his breed and is strong and powerful. However, his kind nature means that he is very safe to be with. Teri is a great-hearted animal with a strong sense of dignity. He doesn't appreciate being bullied or forced into action. He also dislikes being rushed, as he takes time to think about things. When asked nicely and with good leadership, he is very co-operative. He is excellent at teaching people to be assertive without dominance. ​ 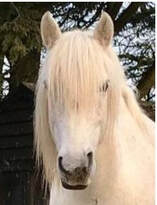 Jock is our second purebred Highland pony. He originally came to us completely unbacked and untrained, and with numerous fear issues hidden under a bolshy attitude of  'I do my own thing!' Ponies like him often have a hard time with humans because his behaviour looks stubborn when it is actually fear driven. He is now 14 years old and is turning out to be a lovely teacher. He is patient and kind, and does his best to do what is asked, even when it is hard for him. ​ 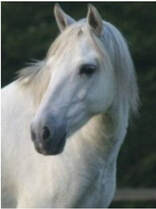 Cloud is a Connemara pony. He is about 25 years old, but as he was a rescue case, we are not sure of his exact age. He came from an environment where he was very stressed and unhappy, and he was behaving extremely badly as a result. He came very close to being euthanised, but fortunately a friend took pity on him and bought him just in time.  She began rebuilding his trust and then he came to us. These days he is his true self - a sensitive, gentle pony who is capable of deep connection. He is also a lot of fun. He knows many circus tricks and is increasingly known as our dancing pony, especially if there happen to be coconut treats in anyone's pocket! 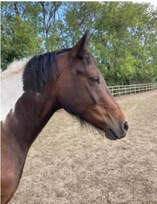 Aragorn is a confident, often playful character who will do whatever you ask - as long as you ask with clarity. If you are not sure of yourself, he will offer ideas of his own. For this reason he is another excellent teacher, challenging his human partners to be true and centred leaders. Like our other ponies though, he is friendly and kind. 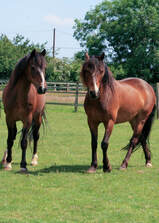 Alfie is a 12 year old New Forest pony. He and Roux are cousins and they have never been separated. As a result they have a special relationship and are almost always together, even sharing from the same food bucket. Alfie is a very kind pony who has a strong sense of care for his human partners. It is important to watch for Alfie feeling overwhelemed as he will always try to do what is asked of him, even when he is worried about it.

Roux is a 12 year old New Forest pony. Cousin to Alfie, he perfers to be in his company. Roux is a sensitive pony who needs reassurance from the humans around him. Like Alfie, he is gentle but needs his partner to be aware that he might become frightened and support him if he does. For this reason Roux normally partners with more experienced people.