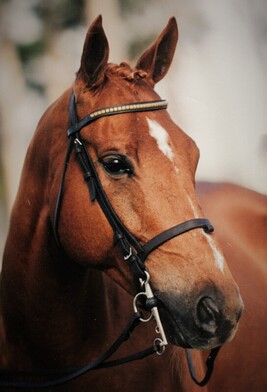 In October 2004, on an aeroplane onroute to England, I opened Kim Meeder’s book , 'Hope Rising'. I only read a few pages before I had to stop as I could not see the words for tears.  Kim described an incident in which a boy who had lost faith in people began to learn to trust again, simply because a horse chose to connect with him. Looking back, I recognise that it was on this day that the seed of 'Heart to Hand Pony Interaction' was planted. I had experienced of the power of horses to heal the human heart. My own horses had given me so much, and had taught me so much. So I understood the truth of the narrative in Kim Meeder’s book of a life-shifting encounter between a disillusioned  young boy and a horse.

​Although I had very little access to horses growing up, I was always passionate about them. My first horse, acquired in 1995, was a four year old Thoroughbred named Histor. He was an incredible 'dreams come true' gift from my sister -in-law. Since then I have had many horses share my life, and every one of them has brought me so much joy. There was one-eyed Queen, the riding school horse who taught me to ride and whom we subsequently bought and gave a well-deserved retirement. After our children were born we acquired ponies for them and three of the girls went on to become competent horse women. There were the adorable Section A Welsh ponies Candy and her foal Tiffany, bought for my little girls to enjoy; Blaine, imported from Ireland as a 13th birthday gift for my daughter Kerrin; mischievous JJ the New Forest pony; Waznot the Dales pony; and Tim the show pony (we called him Timmy Tiptoes because he was so fine and delicate). Pippin, a Section B pony and the first Blue Roan we had ever seen, stole our hearts from us and left us bereft when he died, aged 24. Maesstro (Feisty Meisty) the Arab and Aragorn the WelshXColoured horse were given as gifts to my two younger daughters. Zulu the Friesian, Charlie the Cob and Dora ('Dora Explorer') the Warmblood came for training with Kerrin and taught us all a lot.  Cloud the Connemara pony came to us after a narrow escape from the knacker and is still with us, well into his twenties. And then there are my two Highland ponies, Teri and Jock, both of whom delight my heart, and who have made me into a dedicated lover of the breed. Most recently the New Forest ponies, Alfie and Roux, cousins who have never been separated and who have a close bond, have joined our herd.

We always enjoyed sharing our horses and ponies with the people who came to our home. Cuddles, grooming, groundwork and riding were on offer, and the children learned to teach whatever they knew. Sharing my passion for horses with the children was  wonderful, and it is a period of our family life that we look back on with great fondness. It was sometime during this season that I first mentioned the idea of 'pony interaction' in a conversation with a good friend, Catherine Edwardes. I told her my dream of creating a safe environment in which people could interact with horses. We were already experiencing the joy of sharing our ponies with visitors. I could see how valuable such interaction was for everyone involved. And I had never forgotten that story in Kim Meeder's book.
Fast forward a few more years and we found ourselves at Kingdom Horse, where we met Ingela Larsson Smith. In the next few years all three daughters and I were to participate in True Connection courses with Ingela. But the other lovely thing that happened when we met Ingela was that we got involved with Horses for Orphans, the charity Ingela and her husband Richard had founded. We loved listening to Ingela’s stories about the children she was working with, and we spent many hours designing and illustrating a journal for them to record their learning. The desire to go to Brazil grew as we worked on this project, and in 2012 two of my daughters and I went as Horses for Orphans volunteers for a couple of weeks and loved it. It was particularly special to meet the group of children for whom we had designed those journals. Subsequently my daughter Julie Anne has gone back to Brazil a number of times, and Ingela remains one of my dearest and most highly respected of friends.

Horses for Orphans does what it says – facilitating opportunities for orphans and street children in Brazil to encounter horses. The purpose is three-fold: The children learn horse management, training and riding so that potential for future employment is created; they learn English, a useful second language; and there is opportunity to process trauma and experience emotional healing.

Subsequently all three girls and I ended up training as 'Think Like a Pony' instructors so that we would be better equipped to offer encounters with horses in a safe context. 'Think Like A Pony' is a leading organisation in the field of equine therapy, pony training and children's natural horsemanship. We learned a lot from Lynn Henry, and I often find myself thinking of things she demonstrated and said. 'Think Like a Pony' has a high safety standard and those principles are well ingrained in what we do now. Along with the 'Think Like A Pony' qualifications we also gained 'Horse Agility' instructor status.

It was Lynn Henry who first put the idea of equine massage in my mind with a casual comment that I had "healing hands and that I should find a way to use them with horses’" It was a passing sentence but it changed my life, quite literally, sending me off on the rabbit trail of investigations that eventually led me to Jim Masterson. In May 2013 I both did the weekend course and the 5-Day course, and then followed on with the 3 Fieldwork blocks and the required Anatomy course. It became my goal to have 'Jim-hands' and finding softness with intention became something I began to pursue in all my interactions with horses. I certified as a MMCP in June 2015. It is probably the qualification that means the most to me out of the things I have done, as it is so close to my heart. ​​​And it changed my whole way of being around horses. The softness I now pursue in my interactions with them is certainly built on the foundation of what Jim taught me. And in turn, this is what I try to teach people.